It’s National Bacon Day, according to the National Day Calendar website, and Twitter is buzzing with praise for the delicious meat and ideas for celebrating the holiday.

Some may question whether National Bacon Day is even a real holiday, but bacon lovers mostly agree that any excuse to eat some bacon is a good one. And there is certainly no shortage of ways to enjoy it. One popular food truck in San Francisco, appropriately called Bacon Bacon, became so popular from selling items from their bacon-centric menu on the streets of the city that they now have a permanent location. Their bacon breakfast burritos are amazing.

Thank you to @otgsf for another great season at Ft Mason. Tonight is the final night OTG Ft Mason until next year. pic.twitter.com/PPaWQyf8N6

If you’re not near San Francisco, stop by any fast food restaurant and there is sure to be some kind of bacon-enhanced dish on their menu, such as the popular Baconator cheeseburger at Wendy’s.

If you’d prefer to get creative in the kitchen, there are tons of ways to use bacon beyond simply frying up a package in a pan and chowing down. A Food Network recipe for bacon-wrapped dates sounds incredible.

If you’re feeling romantic, you can make some roses for your bacon-obsessed love.

According to Mental Floss, bacon dates back to at least 1500 BCE in China when the Chinese first salted and roasted pork bellies, making bacon one of the oldest processed meats. The ancient Romans had a dish called petaso, which involved boiling salted pig shoulders with figs and serving them with a pepper sauce. The first bacon factory was opened in Wiltshire, England, in 1770. The brining method used in that factory is still used today. Known as the “Wiltshire cure,” it provides a sweeter, less salty flavored bacon than methods used for the packaged bacon more commonly found in supermarkets. 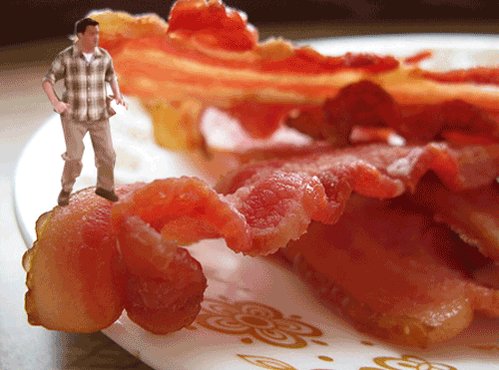 National Bacon Day may be a bigger deal in some places than others. According to the American Meat Institute, these 10 American markets eat more bacon than the rest.

Of course, not everyone eats bacon. That doesn’t mean they can’t celebrate National Bacon Day. There are other kinds of bacon that deserve celebrating.

One option is to watch a Kevin Bacon movie, such as Apollo 13 or Sleepers. He was also in Footloose, a role he parodied in an appearance on The Tonight Show Starring Jimmy Fallon.

If you’re interested in more intellectual pursuits, you could decide to celebrate National Bacon Day by reading the works of 17th-century English philosopher Francis Bacon. According to BBC America, some even believe Bacon secretly wrote some or all of Shakespeare’s plays.

Some may choose to forego National Bacon Day celebrations in favor of International Bacon Day, which will be held on September, 2, 2017. For those who are taking the opportunity to celebrate today by eating as much of the salty stuff as they can, it may be wise to avoid overindulging like the guys in the video below. As good as bacon tastes, there are health concerns for eating too much of it too often. According to WebMD, 68 percent of the calories in bacon come from fats, and each serving averages about 30 milligrams of cholesterol. One suggestion they make is to switch to turkey bacon with only occasional indulgences of the pork variety.